Friend, we all have “mystery symptoms” now and then.

And other times, they get WORSE.

If your feet are DRAGGING… and your energy is SAGGING…

It could be the work of a HIDDEN culprit.

You don’t have to live near a nuclear disaster site… toxic waste dump… or EPA “superfund” site to be in the crosshairs for toxic exposure.

And you don’t even have to FEEL sick!

In fact, too many Americans are subject to chronic, low levels of exposure to too many heavy metals – and from everyday items!

I’m sure you’ve heard something about the benefits of a good “detox” – but this is something that no “juice cleanse” or “hot yoga” session can handle thoroughly.

It requires something a little more POWERFUL… but no less NATURAL.

Citrus secret for heavy-duty detox
Pectin is a substance found in the peels of citrus fruits like oranges, lemons, and grapefruit.

It’s a type of indigestible fiber — one that you’d never want to eat in raw form.

Your body CAN digest it just enough to take advantage of its benefits.

And one of the MOST IMPORTANT things modified citrus pectin can do for your body is help it RID ITSELF of toxins.

I’m talking about a thorough detox from…

These are heavy metals that are DANGEROUS even at low levels…

And even causing cancer!

Think you could never be POISONED by something like arsenic? Think again.

Arsenic CONTAMINATES soil in certain areas – even farms and fields of grain, like rice.

Yes, even in THIS country.

If your drinking water comes from a well, it could contain unsafe traces of arsenic because of its proximity to the soil!

And even if you’re drinking from “clean” tap water, lead could be leaching into it from your pipes!

Lead is a known carcinogen – one that our skin can absorb, allowing it to travel through our bodies and into our brains.

That’s a problem if any of your cosmetics… like lipsticks, eye shadows, blushes, lotions, mascaras, foundations, powders, and even shaving creams… contain what the FDA allows as a maximum level.

It’s not just lead in your makeup… but also possibly cobalt, nickel, mercury, and more!

And as you’ve read right here in eAlert, cadmium – another carcinogen — has been found in some disposable coffee cups.

Talk about a wake-up call!

A rogue’s gallery of toxins… including cadmium… has also been found in certain types of dentures, too.

So even if you’re not directly DRINKING something that’s LACED with poison… the poison could ALREADY be in your mouth!

The human toxic load is so WIDESPREAD… some folks have just grown accustomed to it.

But this stuff is NOT supposed to be in your body.

Fortunately, modified citrus pectin can help get it out… by BINDING to the metals and SHOWING THEM THE FRONT DOOR!

Now, your body CAN eliminate some of these toxins on its own…

But modified citrus pectin could help it work BETTER.

In one pilot trial, healthy folks who consumed this substance showed dramatic increases in their excretion of heavy metals, including…

And the results were significant in as little as 24 hours.

These study subjects WEREN’T actively sick. They HADN’T called “Poison Control.” In fact, the amount of metals in their bodies was considered “normal”!

Friend, it’s NOT normal to be carrying around that much toxic waste.

Now, you might be wondering whether it’s safe to SWEEP OUT the heavy metals in your body…

In fact, modified citrus pectin has shown to be safe and gentle enough to give to children…

And with no adverse effects.

A patented version called PectaSol, which has been the subject of NUMEROUS clinical trials and other published studies, can be found in many commercially available supplements from quality makers at your local health food store or online.

Now, chelation is serious business – so it’s best to approach it with the help of an integrative doc.

Sometimes detoxing can make you feel worse before you feel better – which means it’s working. But you’ll want to have a professional keeping their eye on you.

To PURGING the poisons,
Sarah Reagan 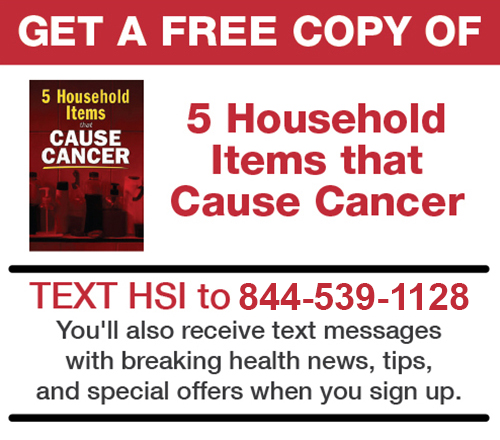 By texting HSI to 844-539-1128, you are providing your electronic signature expressly consenting to be called and texted (including by prerecorded messages, using an autodialer, and/or automated means) with alerts, stories, reports, and marketing communications from Institute of Health Sciences, LLC. and its authorized representatives at the phone number you provide, including landlines and wireless numbers, even if the phone number is on a corporate, state or national Do Not Call list. You also consent and unconditionally agree to our Privacy Policy and Terms of Use, including the arbitration provision and class action waiver contained therein. Msg&data rates may apply. 15 Msgs/Month. You are not required to agree to this as a condition of making a purchase.

The following Terms and Conditions apply to your use of the website located at hsionline.com (the “website”) and any text messages that you send to or receive from the Institute of Health Sciences, L.L.C. These Terms and Conditions constitute a binding agreement (“Agreement”) between you (“you”) Institute of Health Sciences, L.L.C (“we”, “us”, etc.)  Please read these terms carefully.

By providing your telephone number to us, texting us a short code listed on the website, or otherwise indicate your agreement to these Terms and Conditions, you are agreeing to the mandatory arbitration provision and class action waiver below.

ARBITRATION IS MANDATORY AND THE EXCLUSIVE REMEDY FOR ANY AND ALL DISPUTES RELATED TO THIS WEBSITE, THIS AGREEMENT, AND ANY TELEPHONE CALLS, EMAILS, OR TEXT MESSAGES THAT YOU RECEIVE FROM OR ON BEHALF OF US, UNLESS SPECIFIED BELOW OR UNLESS YOU OPT-OUT.

When you provide your telephone number on this website or send a text message to us with or from a short-code, you agree to receive alerts and communications, and marketing messages including those sent via automated telephone dialing system, text messages, SMS, MMS, and picture messages from Institute of Health Sciences, L.L.C at the phone number you provide on this website or the phone number from which you text the short code, including on landlines and wireless numbers, even if the phone number is on a corporate, state or national Do Not Call list. You also agree to the mandatory arbitration provision and class action waiver below. Your consent is not required to purchase goods or services. Message & data rates may apply.

You may opt-out at any time by texting the word STOP to the telephone number from which you receive the text messages.  Call 1-888-213-0764 to learn more.  By providing your telephone number, you agree to notify us of any changes to your telephone number and update your account us to reflect this change. Your carrier may charge you for text messages and telephone calls that you receive, or may prohibit or restrict certain mobile features, and certain mobile features may be incompatible with your carrier or mobile device. Contact your carrier with questions regarding these issues.

Any dispute relating in any way to telephone calls, emails, or text messages that you receive from or on behalf of Institute of Health Sciences, L.L.C this website, or this Agreement (collectively “Disputes”) shall be submitted to confidential arbitration and shall be governed exclusively by the laws of the State of Maryland, excluding its conflict of law provisions.  For the avoidance of doubt, all claims arising under the Telephone Consumer Protection Act and state telemarketing laws shall be considered “Disputes” that are subject to resolution by binding individual, confidential arbitration.

If a Dispute arises under this Agreement, you agree to first contact us at 1-888-213-0764 or help@hsionline.com. Before formally submitting a Dispute to arbitration, you and we may choose to informally resolve the Dispute.  If any Dispute cannot be resolved informally, you agree that any and all Disputes, including the validity of this arbitration clause and class action waiver, shall be submitted to final and binding arbitration before a single arbitrator of the American Arbitration Association (“AAA”) in a location convenient to you or telephonically. Either you or we may commence the arbitration process by submitting a written demand for arbitration with the AAA, and providing a copy to the other party.  The arbitration will be conducted in accordance with the provisions of the AAA’s Commercial Dispute Resolutions Procedures, Supplementary Procedures for Consumer-Related Disputes, in effect at the time of submission of the demand for arbitration.  Except as may be required by law as determined by the arbitrator, no party or arbitrator may disclose the existence, content or results of any arbitration hereunder without the prior written consent of both parties. Institute of Health Sciences, L.L.C will pay all of the filing costs.  Without limiting the foregoing, YOU EXPRESSLY AGREE TO SUBMIT TO ARBITRATION ALL DISPUTES RELATING TO ANY TEXT MESSAGES OR TELEPHONE CALLS YOU RECEIVE FROM OR ON BEHALF OF US OR ANY ENTITY WITH WHOM WE MAY SHARE YOUR TELEPHONE NUMBER.  Further, we both agree that all entities with whom we share your telephone numbers shall be third party beneficiaries of this Agreement to Arbitrate Disputes, and that those entities have the same rights as Institute of Health Sciences, L.L.C to enforce this arbitration provision.

Notwithstanding the foregoing, the following shall not be subject to arbitration and may be adjudicated only in the state and federal courts of Maryland: (i) any dispute, controversy, or claim relating to or contesting the validity of our or one of our family company’s intellectual property rights and proprietary rights, including without limitation, patents, trademarks, service marks, copyrights, or trade secrets; (ii) an action by us for temporary or preliminary injunctive relief, whether prohibitive or mandatory, or other provisional relief; (iii) any legal action by us against a non-consumer; or (iv) interactions with governmental and regulatory authorities.  You expressly agree to refrain from bringing or joining any claims in any representative or class-wide capacity, including but not limited to bringing or joining any claims in any class action or any class-wide arbitration.

The arbitrator’s award shall be binding and may be entered as a judgment in any court of competent jurisdiction. To the fullest extent permitted by applicable law, no arbitration under this Agreement may be joined to an arbitration involving any other party subject to this Agreement, whether through a class action, private attorney general proceeding, class arbitration proceedings or otherwise.

You further acknowledge and agree that by clicking on a button labeled “ORDER NOW”, “SUBMIT”, “I ACCEPT”, “I AGREE”, “YES”, by texting a short code to us in response to a request on this website, or by clicking or similar links or buttons, you are submitting a legally binding electronic signature and are entering into a legally binding contract.  You acknowledge that your electronic submissions constitute your agreement and intent to be bound by this Agreement.  Pursuant to any applicable statutes, regulations, rules, ordinances or other laws, including without limitation the United States Electronic Signatures in Global and National Commerce Act, P.L. 106-229 (the “E-Sign Act”) or other similar statutes, YOU HEREBY AGREE TO THE USE OF ELECTRONIC SIGNATURES, CONTRACTS, ORDERS AND OTHER RECORDS AND TO ELECTRONIC DELIVERY OF NOTICES, POLICIES AND RECORDS OF TRANSACTIONS INITIATED OR COMPLETED THROUGH THE WEBSITE.  Furthermore, you hereby waive any rights or requirements under any statutes, regulations, rules, ordinances or other laws in any jurisdiction which require an original signature, delivery or retention of non-electronic records, or to payments or the granting of credits by other than electronic means You may receive a physical paper copy of this contract by contacting us at help@hsionline.com.